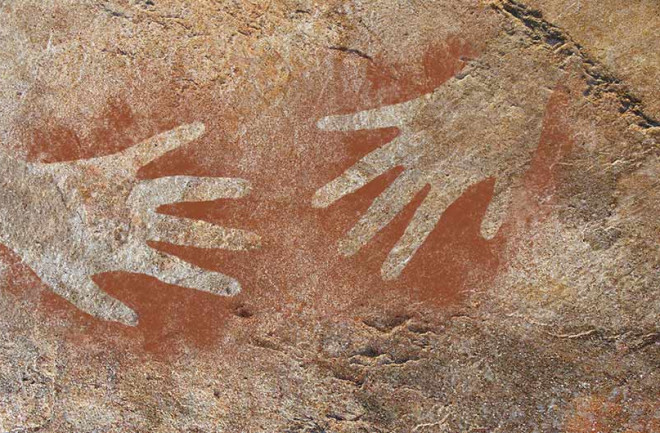 (Inside Science) — Tens of thousands of years ago in what is now Europe, people held their hands against cave walls and blew a spray of paint, leaving bare rock where their hands had rested. Many of these stencils show all five fingers, but in some, fingers appear to be shortened or missing.

Researchers have proposed grisly explanations for these absent digits: Perhaps the artists lost fingers to frostbite or disease, or perhaps they endured amputations for ritual purposes or punishment. But other experts have long argued that it’s more likely they weren’t missing any fingers at all. Instead, the stone age artists may have been folding their fingers down to make hand signs — possibly humanity’s earliest venture into writing on the wall.

Now, a pair of linguists at the IKER lab at the French National Centre for Scientific Research (CNRS) has weighed in on the debate, focusing on the hand stencils of Gargas Cave in France. All 92 stencils they analyzed correspond to hand positions that would be easy to make one-handed in the air, suggesting they would work well as components of a sign language. The findings from Gargas were published in March in the journal Philosophical Transactions of the Royal Society B. The researchers are now expanding their analysis to other caves in western Europe that also contain hand stencils, and so far they are finding the same pattern, according to Aritz Irurtzun, one of the researchers who conducted the study.

“This gives weight to the hypothesis that these represent a sort of sign language,” said Irurtzun.

Read the rest of the story at https://www.discovermagazine.com/planet-earth/cave-paintings-may-depict-ice-age-sign-language.